For a brief instant a sudden impulse is prompting my eyes to quickly escape from the magnet of computer screen to scan the immediate airport horizon. Crying babies, airport staff speaking on intercoms, muffled side conversations from nearby seat neighbors, and streams of luggage donning pedestrians are erupting into my senses.

White iPod earbuds spooning with my eardrums, I can see my reflection from a front window.  The task of completing this blog post is starting to elevate to the top of an internal list of layover priorities. My eyes bounce downward towards the pending work in progress.

It’s about 7pm in Philadelphia and in one hour I’ll be pacing through a departure gate towards a plane destined for Lisbon, Portugal. American Airlines Flight 738 will land at around 9am and this will mark the start of a six to seven week hiatus in Europe.

Sitting at Gate 26 I can see a growing congregation of future plane partners developing to the left and to the right from where I’m seated.

This post is coming about a week too late. Since coming back from a trip to see friends in Missoula, Seattle, and Oregon, time for writing has been scarce. After visiting the Northwest for a gaggle of weeks (September 28-October 17)  I flew to New York on October 20th to visit some great friends in Jack, Jimmy, Kelsey, and Mark but more details about that will come in the next blog post!

In total there were six days spent between Seattle, Portland, Seaside, and Astoria.

During my final day in Montana on October 11th, my good friend Ryan dropped me off at the Missoula Airport.  A quick flight to Washington was hopped. At the University of Washington campus I was greeted by Holly, a good friend who was met in Murcia, Spain. She was kind enough to host me for two days. She, her boyfriend and fellow Murcia buddy Alvin, and myself got some delicious El Camion Mexican Food, toured Gasworks Hill, and wandered around the trendy Fremont neighborhood. The last time the three of us hung out was when we got ice cream in a random Spanish plaza over a year ago. On my second day in Seattle I met up with Vanessa, a salsa dancing friend who I hadn’t seen in over five years. We spent the day catching up over a walk around South Lake Union then capping the day with delicious vegan food at the No Bones Beach Club. 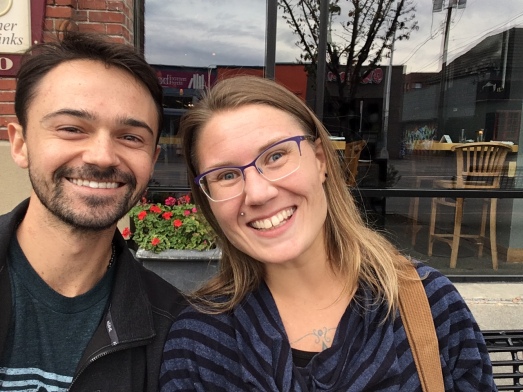 After two days a Bolt Bus sent me from downtown Seattle to downtown Portland, Oregon. Three days of non stop rain was waiting for me upon arrival. The main reason for coming to PDX was to catch up with Tucker and Kristina, two close friends from Missoula who moved out there over three years ago. We hadn’t seen one another since August of 2012 so a reunion was necessary. Between Swedish breakfast at Cafe Broder, dangerous impulse shopping at Powell’s Books, and dabbling in scores of delicious craft beer, the stay in Portland was great. The city boasts a chill energy that is hard to replace.

Note: Tucker, Kristina, and myself failed to take a group picture. For those who don’t already know what they look like, let me tell you that they are very very attractive people 🙂

Typhoon-like weather prevented me from taking a bus to Seaside, Oregon to see Kyle and Charlie on Saturday of that week. The coast received a large storm with winds almost reaching one hundred miles an hour. In Portland the trees waved with stressful discontent and scattered throughout various streets one could see debris from fallen branches. Luckily Sunday was more mild and within two hours an Amtrak bus delivered me to the grey skied coastline. Kyle and I used to live together in Missoula a few years back, and Charlie is a great friend who I knew during the early days of college. It was my first time in Seaside so we did an obligatory hike around Haystack Rock near Cannon Beach, got some savory coffee at Sleeping Monk, and spent the evening in nearby Astoria at Fort George Brewery, Buoy Beer Company, then at the Voodoo Room.

On Monday, October 17th I bid farewell to the Pacific Northwest and returned home to Sausalito. It was truly special to see everyone during that span of time, and I feel blessed that we didn’t lose contact. I hope that our next reunion happens a lot sooner than later (Except Kyle, that can wait a couple more years…)(That’s a joke, sorry).

A further blog post is necessary for talking about New York, so updates are on the way!

Have a great day, thanks for checking out this blog. You look really good, keep up the ship-shape work 🙂