One afternoon Jack and I found ourselves in Beijing, China.

Beijing is the capital of the People’s Republic of China and was founded in 1045 BC. With an urban population of about 21 million, we were leaving one gigantic city (Hong Kong) and replacing it with another.

As our plane from Hong Kong taxied on the tarmac, I was doing my best to be mentally prepared for some truths (at least these are what I thought were true):

-We’d be under heavy surveillance by the Chinese government.

-We wouldn’t be able to access some of our beloved phone applications.

China blocks access to Facebook and Google, partially out of preoccupation that “Western” applications are sources of anti-government propaganda. As a result, internet censorship in China is arguably the most expansive in the world.

Instead of Facebook or Google, almost every Chinese person uses WeChat. Jack and I attempted to create WeChat accounts but it was complicated so we opted to save the headache.

Fortunately, some friends from home had already warned us about the censorship and our solution to this impending dilemma was getting a VPN for our phones.

A VPN is a virtual private network that can be used with a public network, helping a user send and receive data from anywhere. It securely blocks anyone from seeing what you’re doing online and conceals one’s location. While in China, a VPN is necessary especially for people (Jack and me) who heavily depend on Facebook, Google, WhatsApp, Instagram, and Tinder (jokes?) to function.

We both already had VPN apps downloaded on our phones: Jack downloaded Turbo and I was using Nord. In the airport we passed through customs without an issue, then came the fateful moment when we tried to access WIFI. His phone connected to the network but mine was blocked. Making matters more complicated, the China Mobile kiosk employee refused to sell me a SIM card. My phone was too old, she said. Jack, on the other hand, was able to buy a 4G plan (because his phone was newer) and this ended up being our lifeline during the next few days.

Even after buying a SIM in the city center, I still wasn’t able to connect to any WIFI network. The plan they sold me was 2G. No WIFI and the Nord VPN wasn’t helping; I felt like I was naked in a faraway place. Using my laptop at the hostel, I was able to use Safari instead of Chrome and Bing instead of Google. This basically meant that I was a ghost.

In spite of technological hiccups, we had a wonderful time in Beijing.

The city resembled what one would imagine from the capital of a communist country: The majority of building designs appeared to date back to the 1980s, walls were painted in soft color tones, green-uniformed soldiers mulled around metro entrances, most street corners had a mounted surveillance camera, people donned conservative attire, and the layout of most destinations appeared overly minimalistic.

I wasn’t sure if being an American in China would draw a lot of attention. My ignorance was received with refreshing indifference. In spite of a monumental language barrier, the Chinese we interacted with seemed cordial or even slightly amused to see us. In a country where hardly anyone has the genetics to properly have facial hair, Jack’s full beard was an interesting draw for locals.

Additionally, the original worry of being under a government microscope quickly dissolved. Walking around, getting lunch, and getting a taste of daily life, I could see that we were all just human beings. Two strangers from a world superpower visiting another world superpower.

There were moments when our self-esteem was at a record high because random women would walk up and in broken English ask to treat us to tea. We politely declined, not wanting to break their hearts. Inside I wondered if this is what it’s like to be George Clooney. Later, we discovered that these women were “working” and attempting to run up large tabs at bars using our precious yuan.

We needed to save our money for some necessary to-do’s in Beijing:

Throughout its history, Beijing had numerous titles and one was Peking.  Nowadays the only moments when one hears the word “Peking” it’s when they go to a restaurant and order a wondrous plate of mouth-watering roast duck. Peking Duck was once a dish exclusively served to emperors. Duck is now available to anyone with an appetite of a royal and a favorite for those visiting Beijing. We had it for lunch at Li Qun Roast Duck then again with some nice people we met through Couchsurfing. Both instances taught us that our love of duck was real and very spectacular.

Couchsurfing is one of my favorite resources while traveling, and Beijing was the first destination during Jack’s and my trip where we gave it a try. Through this fantastic network, we made two new friends: Doris and Vince. Welcoming, amicable, with a super positive attitude, Doris is from a southern city in China but has been living in Beijing with her husband for a few years now.  She’d recently visited my hometown while on a work trip to California which was really cool.

We arranged a trip with Doris and her coworker Vince to the Mutianyu section of the Great Wall. They rented a car and we met them at a metro station in Beijing then drove about an hour to the wall. Thanks to them we were able to experience one of the New Wonders of the World without a tour or taking a long bus ride.

Mutianyu is less crowded than other sections such as Badaling, making it prime for exploring and taking photos. The sky was cloudless that day, and we were able to enjoy clear views of the countryside.

The entrance cost about $40 and I highly recommend paying for the toboggan ride afterward. After a few hours of climbing and descending thousands of stone steps, a toboggan is a welcomed gift for tired legs.

Doris and Vince’s hospitality was greatly appreciated and hopefully one day I can return the generosity. Meeting locals from China was a major highlight of the trip. 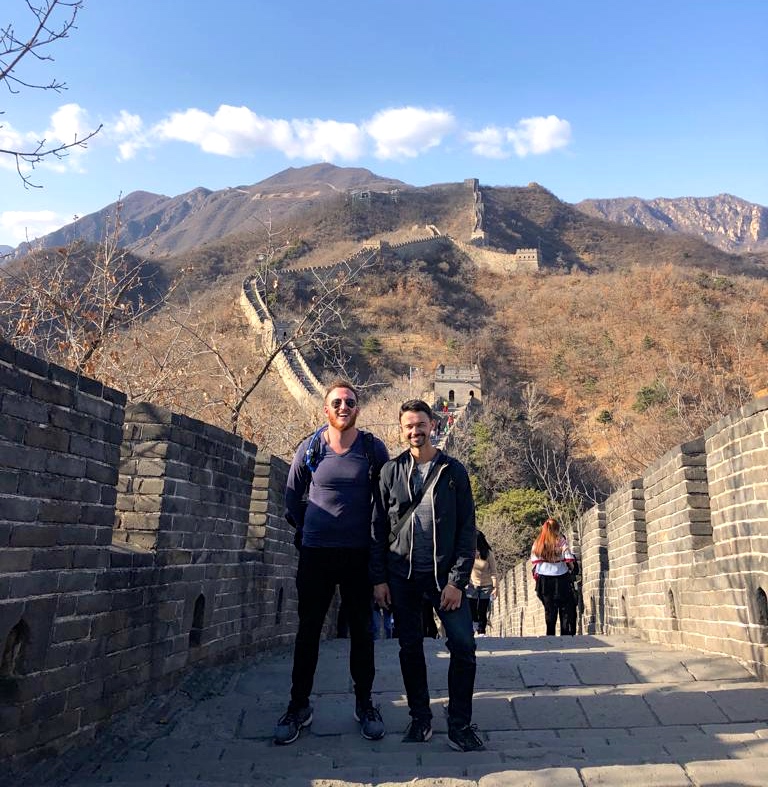 Wandering through the Forbidden City:

On our final day in Beijing, before taking a taxi to the airport and traveling to Zhangjiajie, we paid a visit to the Forbidden City. This was on a Sunday. A cultural treasure that’s a symbol of national pride, on the weekend, and in a country with over a billion people is a recipe for claustrophobia. Jack and I were concerned that no one else had the same plan as us, but within minutes we were thankfully reassured that thousands of other visitors would be there.

Tickets can only be purchased online and one must elect between a morning or afternoon visit, but this isn’t strictly enforced.

The former Emperor’s palace for five hundred years, the Forbidden City consists of nearly a thousand buildings. It was impossible for us to see everything but what we did witness was worth navigating through waves of other photo-takers.

An impending flight was calling our name so we eventually hurried to the closest exit then powerwalked through neighboring Tiananmen Square. It would have been nice to see both destinations longer but time wasn’t our friend.

Three days into our tour of mainland China, we already were packing our bags and off to a new destination:

Zhangjiajie, the inspiration for Avatar.

If you have any questions about what Jack and I did in Beijing, please feel free to contact me!

If you’re one of the ladies who wanted to buy us tea, we said NO already…

Thanks for taking time out of your day to read this blog, it means a lot.