A handful of posts ago I shared some insider information in regards to finding a decent a cup of coffee in Sausalito, California plus Missoula, Montana. Both posts came with years of coffee-drinking and, more importantly, cafe-questing experience.

It’s time to continue this series of posts with a city in southern Spain.

Murcia, Spain has been my other home away from home for four years now. Four hours south of Madrid and thirty minutes from the Mediterranean Sea, Spain’s seventh largest city is a haven for those who enjoy continuous days of sun and a stress-free pace of life.

Murcia is famous for not being famous, as the majority of travelers who arrive in Spain decide on stopping almost everywhere else. This lack of tourism is partially why I like living here. Another reason as why Murcia is an ideal place is because of something else:

Its limitless choices of where I can get embarrassingly buzzed from caffeine.

Compared to anywhere else I’ve visited or lived, Murcia’s coffee is dangerously inexpensive. There also exists a growing number of cafe’s where one can take a break, do some work, or have a conversation with a friend. Here’s my personal list of places where you should order your next cup of coffee in Murcia:

Cafe Haskell was the first coffee shop I discovered in Murcia, and this arguably the best cafe in the city center. The owners are two very nice girls from Italy, Stefania & Giulia, and the inspiration behind their establishment came from a trip they took to San Francisco a few years back. The feeling upon entering here is quant, with memorabilia of San Francisco hanging on each wall. Their tostadas are arguably the best in Murcia.

Socolá is an Italian bakery that has a surprisingly complete menu. They offer brunch and a variety of American delicacies such as pancakes. It’s easy to get trapped here because the atmosphere is welcoming and it’s great for getting work done.

This small, centrally located cafe would be my favorite place in this list, except that they open at 4pm. I usually avoid caffeine at this hour unless I’m preparing for a long night. This being said, the music there is on point, and it’s a good place to enjoy a non-caffeinated tea or crisp beer. 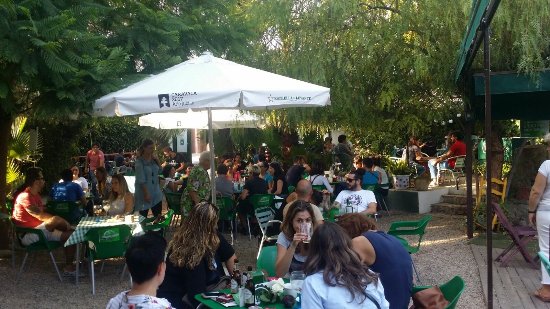 This is maybe the diamond in the rough selection here, in part because you have to technically leave Murcia in order to find it. The Terraza Verde is an outdoor lounge that shares a space with a hostel called La Casa Verde. This might also be one of the most heavily shaded places to sip coffee, as various plants and trees that hang overhead give patrons a junglelike atmosphere. Situated about fifteen minutes by foot away from the center, via a bicycle path that hugs Murcia’s Rio Segura, one can enjoy a Yakka beer or nice vegetarian style menu alongside their coffee.

Cafe de Alba is the most experienced member of this list. This cafe, bar, and music venue has been open since 1986, and boasts a varied clientele. Every time I walk through the door I feel like I’ve just been teleported to the 1950s, thanks to scores of vintage bar paraphernalia sprawled all about.

This cafe gets my nod of approval for three reasons: It has 90 cent americanos (the cheapest I’ve found in the city), it’s connected to a cultural center that has a nifty little library, and on the outside of the building is a massive graffiti three story mural of the iconic Salvador Dalí. This mural is one of the largest in the world, and the artist who painted it Eduardo Kobra, who hails from São Paulo, Brazil.

Cafe Lab: Cafe Lab is almost too perfect. In fact, it’s such a good place to go for coffee that the prices are nearly double everyone else in this list. If you want to learn a new Spanish word, here’s one: pijo. This in Murcia means posh, and Cafe Lab is absolutely this definition. That being said, the baristas are knowledgeable, the atmosphere gives a sense that you’ve just been transported to some mountain chalet in the middle of winter, and overall the experience there is quite nice.

Picaddily Coffee: I have to mention this place because it’s a Murcian company that’s been ballooning around Spain like Starbucks has in the USA. It’s overpriced, but the people who work there are friendlier than most places you’ll visit in Murcia and the openness of their Ronda Norte location is perfect for writing in a blog…