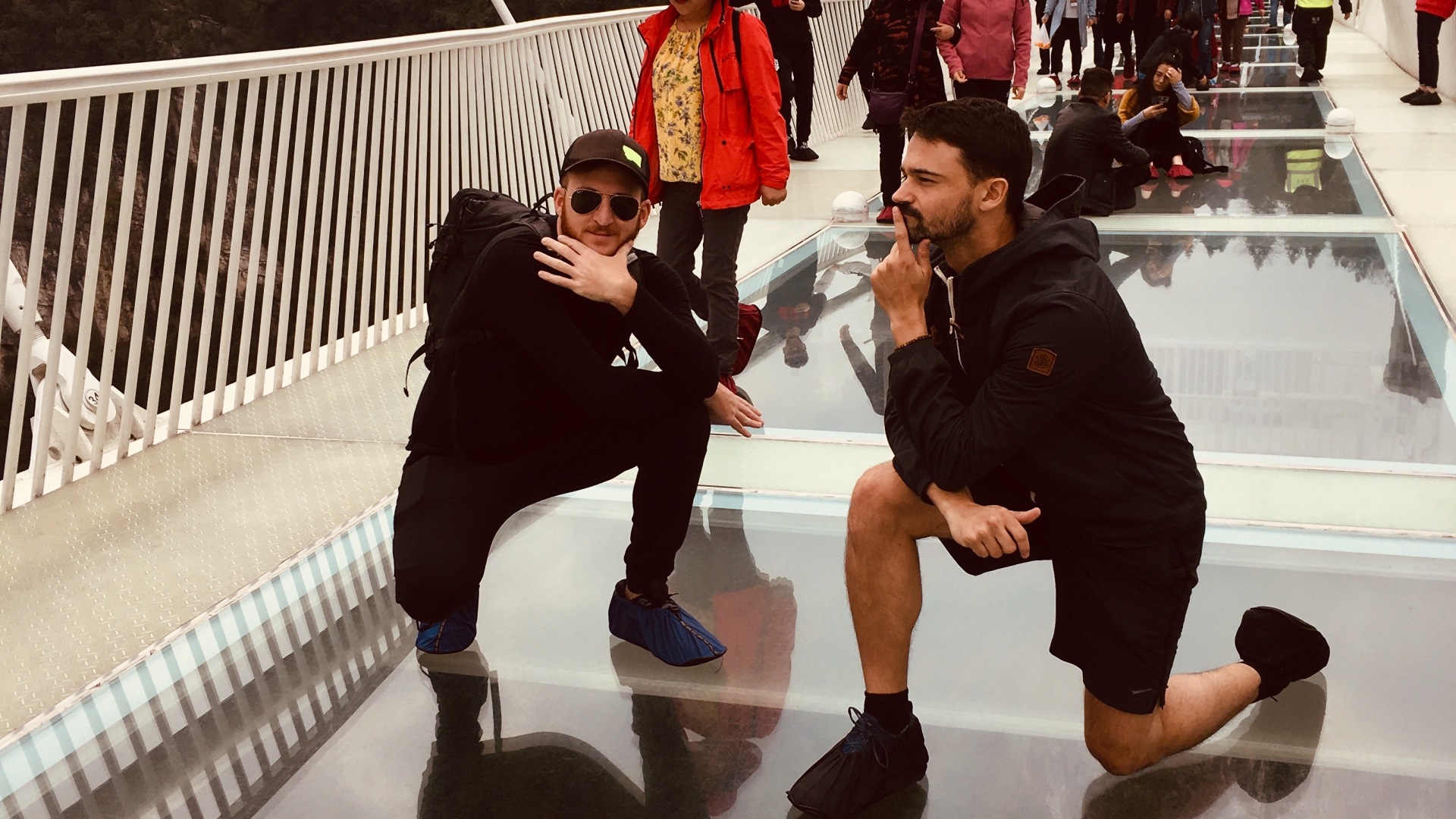 After bouncing around the capital of China for a few days, Jack and I were looking for a change of pace. Multiple days of getting shoved around in Beijing metros was long enough. The great Chinese outdoors was calling us.

We collected our things and took a flight to the city of Zhangjiajie in the Hunan Province.

This wasn’t the final stop. A taxi then chauffeured us to Wulingyuan, about an hour away.

We checked in to our homestay, the Easy Stay, under the cloak of night and then made preparations for the next three days.

When someone hears the name Wulingyaun, there’s a good chance that they might be getting images of some made-up place. This isn’t far off from reality. This is a secluded resort town that’s tucked between pillars of sandstone, cliffs, rivers, and the gateway to the vast Wulingyan Scenic Area.

Our host at East Stay told us that in the summer this town would be overrun by local and international tourists. We arrived in February, the offseason, so the vibe was like a non-scary scene from The Shining because we were the only guests in the entire building.

Within the Wulingyuan Scenic Area are four national parks. We had our sites set on one of them:

The Zhangjiajie National Park: 154 square miles in size, a UNESCO World Heritage site, and the inspiration for a scene in the film Avatar.

At our temporary digs, I deleted the Nord VPN app and switched it with Turbo. I was over the naked feeling of having a non-working VPN in China and opted for a change. Something wonderful happened; WIFI access came back to my phone and suddenly I was back into society.

We relied heavily on Turbo, Google Translate, and Maps in order to get around or communicate with locals.

On our first day in Wulingyuan, we explored a section of the Tianzi Mountain Reserve called “One Step to Heaven.”

After taking in the sites around Tianzi mountain, we took a bus from Wulingyuan to through Zhangjiajie to the Glass Bridge. With over one hundred glass panels and erected about nine hundred and eighty feet above the ground, this sky bridge is one of the more popular attractions in this part of China.

We weren’t alone on the bridge; hundreds of tourists were there with us. Some were brave and would lie on panels, resting their face against the glass. Others here hesitant and even a handful of people would cry in terror, hands gripping the railing.

Jack cruised over the glass without any issues, but for me it was a struggle. Each panel of glass demanded one to let go of their fear of falling to their death.

Before crossing the bridge we found some food hawkers and ordered some road dumplings.

The next day, Jack and I hiked to a lookout to get a view of the Avatar Hallelujah Mountains. Until the year 2010 these were called the Southern Sky Column, but thanks to the popularity of the James Cameron film it changed names. We got a glimpse of just a handful of the three thousand quartz-sandstone pillars that belong to the Zhangjiajie National Park.

New and Old Friends in Shanghai

After Zhangjiajie, we set our sites towards the south, to China’s modern hub of Shanghai. Similar to Hong Kong in the sense that it’s a commercial magnet, Shanghai has a bursting population of over twenty-something million people.

Our immediate plan for Shanghai was to explore the dumpling scene. People go to Bangkok for pad thai, Beijing for duck, and Shanghai for dumplings.

A great moment in Shanghai was grabbing lunch with Shiyin. He’s good buddies with our friend Kirby and used to live in San Francisco. It was our first time meeting him but his long list of mutual connections made for a fun lunch. He shed some light on life in Shanghai which was interesting.

During our stay in Shanghai, we also made good use of Couchsurfing to make some new friends. We met some friendly people from France and Colombia and had a competitive night of UNO.

One of the best highlights of this trip for me was reconnecting with a friend who I met during a trip to Quito, Ecuador. Through Couchsurfing, Ana and I became friends in 2012 but hadn’t seen one another since. She was born in Ecuador but now is working in Shanghai. It was a wonderful coincidence that we were in the same city and able to meet up. After seven years it was great to see her again and I hope the next reunion will happen sooner than later!

On March 25th our stay in China came to an end. I feel safe to say that this country surprised me the most out of everywhere we visited.

I’d like to come back here one day but first Jack and I had our next destination to visit:

Thanks for reading this blog! You’re looking good 😉

Have a wonderful day, take care.

Hi, my name is Dan and I'm from Sausalito, CA. I like to write about traveling and about life in general. It's a fun way to share with the world and overall it's simply something that makes me happy. Cheers! View all posts by Dan Catena

2 Replies to “Around Zhangjiajie and Shanghai”