Once upon a time,

Jack and I finished a month-long journey through Vietnam.

We came back to Hanoi in a mosquito-infested bus from Ninh Binh. During our final Bai Hoi session we toasted to give thanks for all the fantastic memories and delicious banh mi’s.

The very next morning we were gone, but not far.

Minutes after reaching cruising altitude, our flight began its descent towards a country that wasn’t a complete stranger: Thailand.

Just when Jack and I thought that our time in Thailand was over, we somehow found ourselves in Chiang Mai.

Located in the north, we decided to forego the countries’ fourth largest city (175 thousand people) until after Vietnam.

Quite far from Bangkok, and only an hour and some change outside of Hanoi (flying), it made logistical sense to visit during this leg during our trip.

We were missing Pad Thai, cheap juice, and generally friendly people, but more importantly we were coming back for something else: 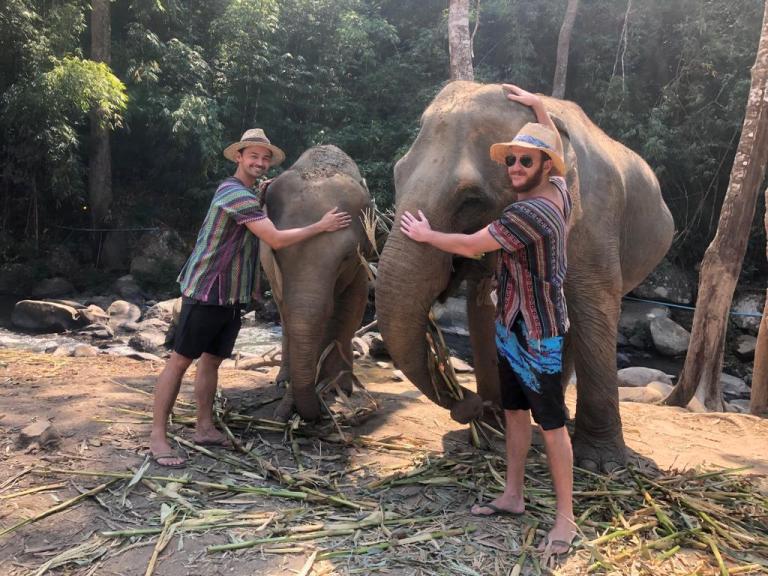 An iconic Thai symbol is the elephant, which can be seen on murals, as statues, as shrines, and even tattoo’d on people’s bodies. In many parts of the world this sacred animal is unfortunately a victim of exploitation and subject to harsh treatment by shady tour companies and circuses. Fortunately, in Thai provinces such as Krabi and Chiang Mai, a new industry has taken root: Elephant sanctuaries. Thanks to sanctuaries, elephants which have been rescued from lives of abuse are able to return to an almost-natural habitat. Jack and I paid for a tour of one of these places, and in doing so we got to feed and bath a group of elephants over the course of a day. This was high on our bucket-list, and we highly recommend Elephant Jungle Sanctuary to anyone looking to have the same experience.

Various friends from back home recommended that we attend a Thai boxing match. Muay Thai is known to many as “The Art of Eight Limbs” and is similar to kickboxing but its roots come from Thailand. During our last weekend in the country we happened to coincide with a tournament taking place at the Chiangmai Boxing Stadium. We discovered that these tournaments happen three times a week, so the crowd was sparse but we could still feel the energy behind each match. Each fight was preceded by a spiritual ritual called the wai ku, and usually the competitor who appeared the most exuberant and devout ended up winning.

Thailand, along with most countries in the region, shows it’s finest colors after the sun disappears. Chiang Mai is no exception. On Sundays, Pae Street of the Old Quarter blocks motor traffic and replaces it with endless rows of art stalls, craft hawkers, and food booths. Our “window shopping” ended with us caving on some new clothes, herbal oils for bug bites, and a few delicious snacks for the road. A surefire way to indulge the senses is to take a stroll in one of these markets. Some necessary bites to try there are curry noodle soup and mango sticky rice. 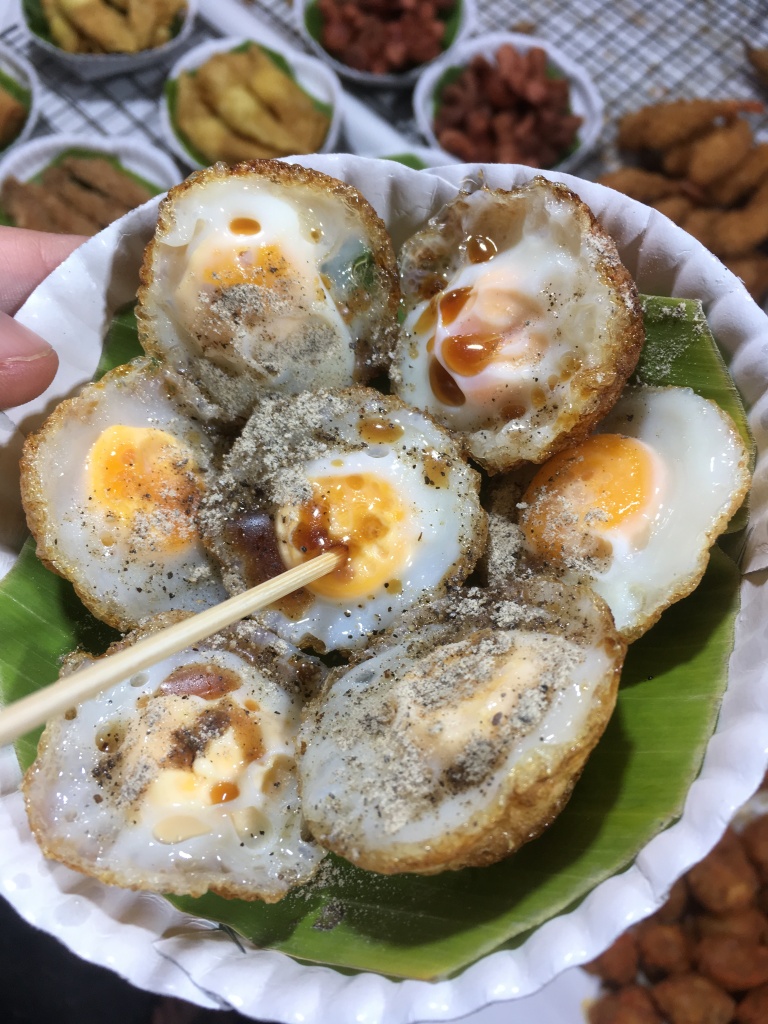 After three nights in Chiang Mai, we left Thailand for probably the last time and hopped a flight to Yangon, Myanmar. Formerly called Burma and previously the countries’ capital, we arrived into Yangon during a sweltering Monday afternoon. This wasn’t our final stop and we hauled our backpacks to the domestic terminal under a shadeless sky. We trotted next to the freeway as motivated taxi’s reduced speed and honked to solicit rides but by the time they caught our attention we were already hiking up to the check-in pavilion.

One hour from Chiang Mai and about two from Yangon, Bagan is the primary tourist attraction for the country that’s seen its international image deteriorate in recent years. Bagan is part of the Mandalay Region of the country, and for four hundred years (9th-14th century) was the capital of the once mighty Pagan Kingdom. At one point over ten thousand Buddhist temples, pagodas, and religious structures were erected throughout the city. It’s hard to call modern-day Bagan a city. It’s more like a town that’s been taken over in vegetation and trapped inside a sea of relics from its rich history. Currently, around two thousand ancient buildings have survived the evolution of time.

We didn’t see the tension and solemnness that’s been encircling the countries’ national issues. What we did see, however, was a place that sparks curiosity. The locals we encountered were friendly, outgoing, and openly interested in knowing why we visited their country. Some people even stared at us like we were Matt Damon, perhaps in part because they hadn’t laid eyes on a westerner before. We also learned that the food here is incredible, cheap, and there even exists a booming vegetarian foodie scene.

Sitting along the banks of the Irrawaddy River, it’s broken down to two districts: Old Bagan and New Bagan. What makes Bagan so interesting is that both districts are already inside the “Bagan Archaeological Zone”. Stepping outside our hostel, looming pagodas were already within eyesight. No one’s allowed to climb any of the buildings, however most are open for entry. The usual sight once inside a pagoda be at least one shrine dedicated to Buddha, and sometimes a stray dog or bat.

Normal motorbikes aren’t permitted for foreigners, so we rented electronic bikes and wandered in every direction. The wind was fierce at times during our stay, and many roads were more like hungry patches of quicksand. Echos from Angkor Wat followed us and youngsters on motorbikes relentlessly hovered around us, advertising “secret” sunrise viewing points. We ended up trusting a guy named Bagan Rapper, a self-proclaimed artist with no desire for money of course. He guided us to a pagoda with open access to a rooftop to see the sunrise. This was maybe one of the better sunrises that I’d seen before and he refused a tip until we declined an invitation to look at his artwork.

Our stay in Bagan was short-lived, and in three days after unpacking our belongings we started the moving process again by boarded a night bus destined for Yangon. Three nights is hardly enough time to experience a cultural hub like Bagan, let alone an entire country like Myanmar. We came to count Buddha statues, for the sunrises and sunsets, and for the sense of accomplishment after navigating between palm trees.

By the time you reach this sentence, Jack and I will already be far away from Yangon.

Right now we’re a few thousand feet in the air, in an airplane that just took off from Beijing.

Have you been to Myanmar or Chiang Mai? How was your experience?

Thanks for reading this blog, have a great day and talk soon 🙂

4 thoughts on “Searching for Elephants and Buddhas”